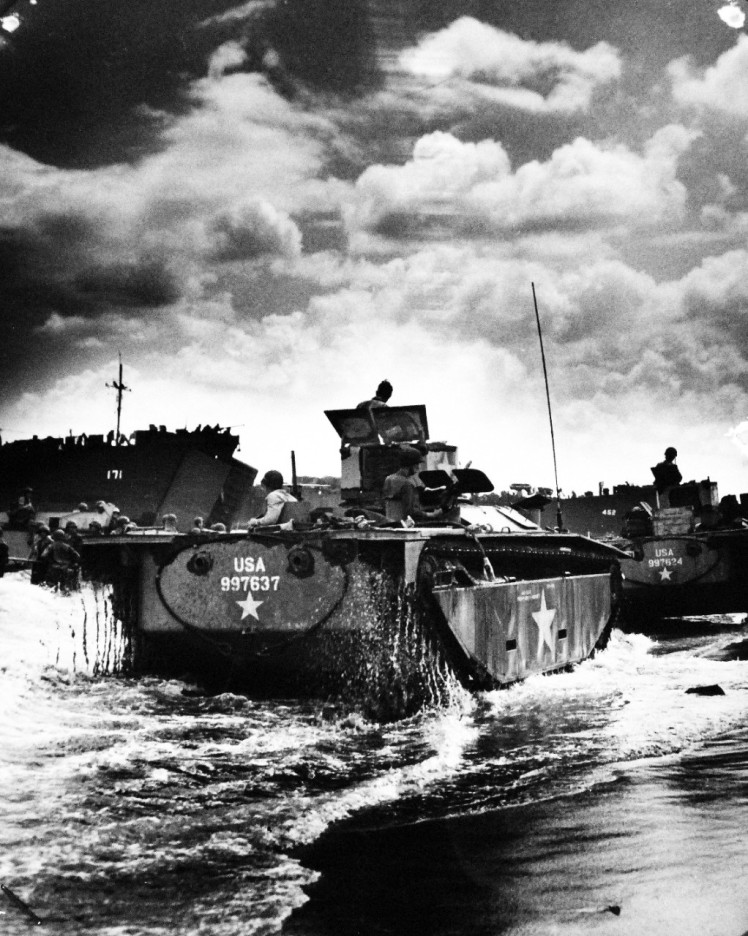 Alligators Charge toward the Foe on Leyte. Official U.S. Coast Guard photograph, now in the collections of the National Archives.

Seventy-five years ago today, MacArthur fulfilled his pledge and returned to the Philippines. Even with reports of weak resistance and the expedited time schedule, the Leyte invasion promised to be the largest and most complicated undertaken up to the point in the Southwest Pacific area. The first order of business was to coordinate air support from Admiral Halsey’s carriers until General Kenney could construct or rehabilitate airfields on Leyte for land-based air. Seven hundred U.S. ships and around 200,000 men were committed to the Leyte invasion.

Leyte is located on the eastern side of the Philippine archipelago roughly two-thirds of the way from the northern tip of Luzon to the southernmost point in Mindanao. North of its narrow waist, a range of four-thousand-foot mountains divides east from west and complicates transit. On the coast east of those mountains, the waters of wide Leyte Gulf are protected on the north by Samar and to the south by the Dinagat Islands. Key water passages nearby are San Bernardino Strait, past Samar to the north, and Surigao Strait, between southern Leyte and Mindanao to the south.

Almost immediately after Halsey suggesting expediting the timeline, Nimitz had been prompt to promise MacArthur support, both in terms of troops and carriers. Nonetheless, the deployment and logistics of the army and the navy, as well as their coordination, would be daunting.

Code-named Operation King-Two by Macarthur’s planners and issued by MacArthur on Sept. 20, the Leyte Plan was based on the assumption that Japanese land and air forces in the Philippines had been seriously crippled and that the Imperial Japanese Navy would elect to remain largely in home waters. It was further assumed that Japanese army strength was limited to one division, which, while well supplied, would soon find itself largely cut off from reinforcements and incoming deliveries.

With MacArthur as supreme commander, Admiral Kinkaid would command all amphibious operations and forces ashore until such time as the beachheads were secure and General Krueger took command of the ground troops – a structure that had evolved and worked well during prior operations.

On the navy side, there were two key players: Admiral Kinkaid, commander of Allied Naval Forces in the Southwest Pacific Area, essentially the US Seventh Fleet, and Admiral Halsey, commander of the US Third Fleet. Halsey had clear instructions from Nimitz to support the Leyte landings with air cover from his carriers, but should an opportunity present itself to destroy major portions of the Japanese fleet, that was to become his primary task. In that event and all others, it was assumed that Halsey and MacArthur would do whatever was necessary to ccoordinate their operations.

By any measure, the combined naval strength of Kinkaid’s and Halsey’s fleets was staggering. Kinkaid’s attack force, officially designated Task Force 77, total 738 ships, ranging from Oldendorf’s battleships to transports and landing craft. Halsey’s Third Fleet totaled 105 combat vessels including the eighteen carriers of Vice Admiral Marc Mitscher’s fast carrier task force, officially Task Force 38. The combined forces totaled slightly fewer ships than the armada that had just assembled off Normandy, but considering its battleships and carriers, it packed a stronger punch in terms of firepower. The logistics of getting men and material to the beachheads were no less staggering.

“We came to Leyte just before midnight of a dark and moonless night,” MacArthur wrote in his memoirs. “The stygian waters below and the black sky above seemed to conspire in wrapping us in an invisible cloak, as we lay to and waited for dawn before entering Leyte Gulf.” It was the wee hours of October 20, 1944 – what MacArthur had closen to call A-day because the generic designation D-day had quickly come to refer almost exclusively to the Normandy landings.

At dawn on the twentieth, the cruiser Nashville with MacArthur on board joined an array of ships entering the gulf, and as the transports took up positions in preparation for disgorging their cargoes of men and munitions, the battleships and cruisers began a ferocious barrage. The Nashville anchored around two miles off the beaches of the X Corps sector, and MacArthur took a front row seat on its bridge.

Giant Seagoing “Freight Cars” Unload War Cargoes on Leyte. A flotilla of Coast Guard-manned and Navy LSTs, those massive-mouthed carriers of war materiel, disgorge their cargoes on the beach of Leyte Island early in the liberation assault in the central Philippines. While anti-aircraft guns from their bows point into the sky against possible Japanese air raids, hundreds of American liberators build unloading “Docks” out to the LSTs’ ramps. U.S. Coast Guard photograph, now in the collections of the National Archives.

By midmorning, the assault waves of four divisions poured ashore as planned. The heavy naval bombardment had driven most defenders inland, and initial resistance was light.

By 1:00 pm, MacArthur decided that it was time to head for shore himself along with Sergio Osmeña. However, the vessel with MacArthur and his party ran aground. MacArthur had counted on tying up to a pier and stepping majestically ashore, immaculate and dry. One of MacArthur’s aides radioed the beachmaster and requested an amphibious craft to take MacArthur’s party the remaining distance to dry ground. The beachmaster who was preoccupied with the confusion of hundreds of landing craft unloading amid incoming sniper fire and since most of the docks had been destroyed in the naval bombardment and while few were still intact, he had no time to show them where they were. Supposedly, the beachmaster angrily replied, “Let ‘em walk.” 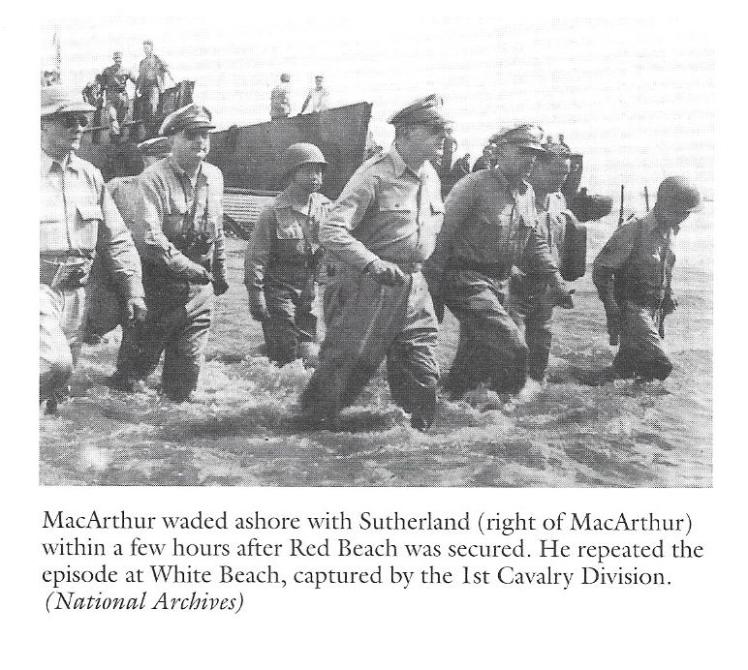 So MacArthur dressed in a crisply pressed set of fresh khakis together with Sergio Osmeña and Carlos P. Romulo had no choice but to wade through knee-deep water. MacArthur with his grim expression partly attributable to his disgruntlement over the gruff treatment was recorded in photograph. MacArthur later on recognized the huge public relations value of the photograph and subsequently it became the standard operating procedure of all beach landings.

A signal corps troops drove up in a weapons carrier at an appointed place in a little clearing carrying a portable transmitter which would relay MacArthur’s historic words to the world.

“People of the Philippines, I have returned. By the grace of Almighty God, our forces stand again on Philippine soil – soil consecrated in the blood of our two peoples . . . The hour of your redemption is here. . . The guidance of divine God points the way. Follow in His name to the Holy Grail of righteous victory!

“Rally to me. Let the indomitable spirit of Bataan and Corregidor lead on. . .”

In the following days, the Japanese responded to the American invasion that would lead to World War II’s biggest and most complex sea fight, the multi-pronged Battle of Leyte Gulf which was fought on Oct. 23-26, 1944 between combined American and Australian force and the Imperial Japanese Navy.

Crisis in the Pacific by Gerald Astor