Juan Luna and The Battle of Lepanto painting 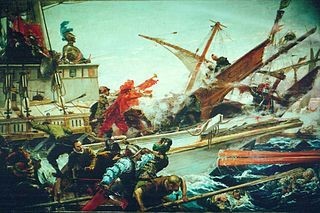 The Battle of Lepanto (Spanish: La Batalla de Lepanto) is a painting by a renowned Filipino painter, Juan Luna, who was one of the first Filipinos to excel and earn recognition in the international field of arts and culture. Another one was Felix Resurreccion Hidalgo. Painted by Luna in 1887, the masterpiece is about the Battle of Lepanto of October 7, 1571.

Luna’s “The Battle of Lepanto” features Don Juan of Austria in battle while at the bow of a ship. It provides significance to the Spanish victory against the Turks. It was also a Catholic victory over the invading forces of Islam. At Lepanto, a coalition of Catholics defeated the forces of Islam who were attempting to conquer and subdue the West to force her citizens to submit to Islamic rule (sounds familiar even today). Therefore, this painting is a portrayal of national pride because the Spanish were instrumental in the victory at Lepanto and it is also a portrayal of pride in the Spaniard’s Catholicism since the battle resulted in a Catholic victory.

By becoming the second Filipino to win the first of the three gold medals during the Exposicion General de Bellas Artes (National Exposition of Fine Arts) in Madrid, Spain in 1884 for his Spoliarium painting, Luna became famous and obtained commissions from the Spanish government to create other canvasses. Although Luna decided to move from Madrid to Paris, France in October 1884, he had to travel back and forth between the two cities in order to meet the demands for painting jobs, plus the task of assisting Filipinos to push for reforms in the Philippines through the seat of the Spanish government in Madrid.

It was the Spanish Senate, through the influence of King Alfonso XII of Spain, who commissioned Luna to paint The Battle of Lepanto. King Alfonso XII’s plan was to hang Luna’s The Battle of Lepanto side by side with Francisco Pradilla Ortiz’s 1878 grand-prize winning masterpiece La Rendicion de Granada (The Surrender of Granada). For this reason, the widow of King Alfonso XII of Spain, Queen Regent Maria Christina of Austria, was the person who unveiled Luna’s masterpiece painting at the Senate Hall of Madrid in November 1887, together with Pradilla’s La Rendición de Granada. Another reason for commissioning Luna to paint The Battle of Lepanto was to compensate Luna for not having been given the grand prize known as the Prize of Honor or Medal of Excellence for Spoliarium. A biased jury, known as the Jury of Honor did not grant Luna the prize because he was a Filipino and in spite of the fact that “public sentiment felt” Luna deserved the award. One year after, The Battle of Lepanto became a gold medalist during the 1888 Fine Arts Exhibition in Barcelona, Spain.

Juan Luna, the notable Filipino painter, was born in Badoc, Ilocos Norte, on Oct. 23, 1857 to proud parents, Joaquin Luna and Laureana Novicio. He studied in Ateneo de Manila and also studied designing at the “Academia de Dibujo y Pintura” in Manila. At the age of 17, Juan Luna earned his certificate as a pilot and travelled to Spain in 1877 to specialize in the Art of Designing at the Escuela de Bellas Artes in Madrid. Because of his exceptional ability in painting, he was chosen by the Philippine government to become pensionado in Europe with a stipend of six hundred pesos a year for four years. It was agreed upon that every year, he would make a picture to be used to adorn the different government buildings.

In 1891, Juan Luna returned to the Philippines. In 1896, he was captured and imprisoned at Fort Santiago by the Spaniards who suspected that he had something to do with the Katipuneros who were plotting to revolt against the Spaniards. He was released in 1897. After travelling to different countries of the East, he got sick and died on Dec. 17, 1899 in Hong Kong.