Copper Mining in Mankayan and the Battle of Lepanto 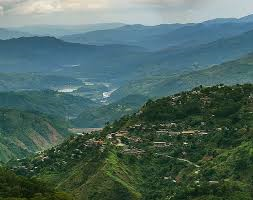 Mining has been practiced in many lands for centuries and copper was the first metal mastered by man. Copper is interwoven closely with the history of every advanced nation of modern times. The Egyptians were the first miners and used copper 5000 years before Christ and the copper mines of Sinai were the most ancient mines in history.

Copper is first of all the electrician’s metal. Without it the amazing progress in electrical science would have been impossible. Most places in the world run a network of copper wires transmitting electricity to carry cable, telephone and telegraph messages, to furnish light and power, to run streetcars and trains. In addition, copper has many other important uses, in peace and war, on land and sea.

Men early on learned to work copper, for like gold and silver it is found locally in a pure state and can be beaten into shape even when cold. The metal is easier to work than iron, for it can easily be hammered into a desired shape, cast or drawn out into fine wire. Alloyed with tin, it gives us bronze, and so widespread was the use of bronze in early history that the period was known as the Bronze Age.

In Mankayan, Benguet where my father used to live before WWII, copper mining is known to have taken place at Lepanto as early as the Ming Dynasty when Chinese traders bartered their wares for copper ingots. When the Spanish explorers arrived in the 16th century, the natives attracted their attention to the extensive use of copper.

Seven different mines were discovered in the Mankayan-Suyoc region during Admiral Pedro Durán de Monforte’s 1667 expedition, and Simón de Anda’s administration (1770-1776) mentioned Igorot copperware. By the 1800s, the Spanish colonial government sent expeditions to survey the mines. On February 3, 1850, an expedition led by engineer Don Antonio Hernandez confirmed the presence of copper in Mankayan. However, hostile natives kept the district blockaded for many years. The opposition to the Spaniards was very much like their encounter with the Ottoman Turks in the “Battle of Lepanto” in 1571 and so the Spaniards named the area Lepanto.

In 1852, Lepanto was established by the Spanish as a comandancia politico-militar, composed of several rancherias which included Mankayan. The first Spanish mining claim on the Cordillera was made by Tomás Balbas y Castro on March 26, 1856, and established a mining company called the Sociedad Minero-Metalurgica Cantabro Filipino de Mancayan. The company ceased operations in 1875.

At the turn of the 19th century, the Americans started prospecting in the Lepanto area. Under the American rule, Mankayan remained under the jurisdiction of Lepanto, and later Lepanto-Bontoc until the latter’s dissolution. Mankayan was later annexed to the sub-province of Benguet as a municipal district in 1913.

After the war, the Lepanto Consolidated Mining Company resumed the mining operations.