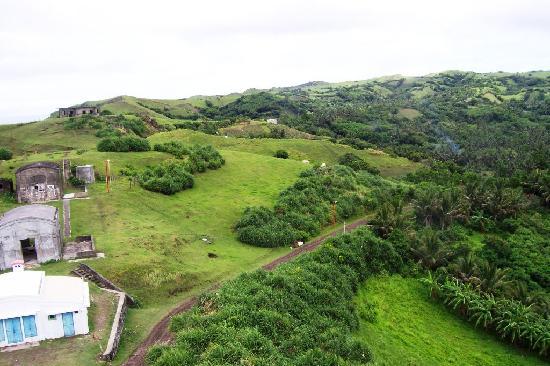 This photo of Batanes is courtesy of TripAdvisor

Beyond the northern tip of Luzon is the mountainous Batanes, Home of the Winds, and the Philippine’s smallest province, both in land area and population. Flanked by the Pacific Ocean on the east and the South China Sea on the west, the islands are lashed by gale-force winds six months of the year. Between July and September, the islands are hit by typhoons quite frequently. The Batanes are bleak and inhospitable from July through December. Rains and cold winds often continue through February, but from March through June, the islands transform into a veritable paradise when the winds are calm and the sea smooth. Buildings have been structured accordingly – the residents live in low dwellings with massively thick walls. A roof net is used to hold down the roof in typhoons.

The islands’ original inhabitants were probably a mixture of Malay plus Chinese and Japanese. They spoke a language that was a combination of several Philippine dialects: Tagalog, Ilocano, Pangasinan, and Ibannag from Cagayan. The people of Batanes are called Ivatans; in the local language this means “place where boats are cast ashore.” The people here look strong, and must be to survive. To survive, the Ivatans must be self sufficient, farming the green hills. Schoolchildren lead the family’s livestock out to graze early in the morning, spend the day at school and later fetch the animals, heading home in the evening. Most of the time, the people live on root crops, goats, and pork. The Ivatans are noted fishermen, constantly building new rounded-bottom boats to replace those lost to the rough seas. Seas are calm enough to permit fishing only during the short summer. – March through June – and two weeks of Indian summer in late fall. During the Indian summer, flocks of birds migrating south for the winter stop in the Batanes for a brief respite, then continue on their journey. Much of the year, everything must move in and out by air, as seas are too violent to allow shipping. Many islanders leave in search of a better climate and economic opportunity in Metro Manila and Tarlac. Some migrated to the Malinao area of Bukidnon in Mindanao during the ‘50s and ‘60s under a government homestead program.

Batanes comprises 10 small islands located in the Luzon strait about 160 km north of the Luzon mainland and is separated from the Babuyan Islands by the Balintang Channel. Y’Ami is the Batanes northernmost island. It is only 50 miles south of Lanyu, the southernmost island of Taiwan. The people on Lanyu may have originally come from the Batanes. The islands are of volcanic or coralline origin, and the terrain is generally hilly, with rocky coastlines. The landscape is very green, with grassy slopes and short, gnarled trees.

Batanes provincial capital is Basco, officially the Municipality of Basco, located in the island of Batan. The town is named after Capitán General José Basco, who led the Philippines to freedom from the control of New Spain, which is Mexico today. The Basco Lighthouse is one of the landmarks.

It is difficult to single out the islands’ most striking assets: the people; neat little white walled houses; impenetrable stone and limestone block buildings; 200-year old baroque churches with thick walls to withstand windy conditions and typhoons; clean villages with no trash nor the odor of the animals that are everywhere; or spectacular scenery. The Batanes is a peaceful place, with almost no crime and the residents are honest. The alluring beauty of the islands are often compared to New Zealand and the Scottish highlands.