What do you know about the Philippines?

Here is a glimpse of my old country, its geography and its natural beauty. 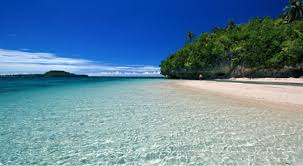 The Philippines is a tropical paradise in Southeast Asia with spectacular beaches fringed with gently swaying palm trees on fine white, pink and in some areas almost black sand. Some islands are well known and some are still deserted and undiscovered, home to underwater wrecks like Spanish galleons, Chinese junks and warships surrounded by vast expanses of verdant landscapes and classic baroque churches.

The Philippine Islands consisting of about 7,100 separate islands largely of volcanic origin traversed from north to south by irregular mountain ranges spread more than 1,100 miles (1850 kilometers) from north to south and nearly 700 miles (1,100 kilometers) east to west at its widest. Total land area is nearly 115,000 square miles (roughly 300,439 square kilometers), slightly larger than New Zealand, roughly the size of the state of Arizona of which about two-thirds is contained in Luzon and Mindanao. The total water surface of the archipelago is 705,115 square miles.

The Philippines consists of three main island groupings: Luzon which includes the islands of Mindoro and Palawan; the Visayan Islands; and Mindanao which includes the Sulu archipelago. The islands are located within the Pacific volcanic belt, are very mountainous, with a comparatively small area of lowland. The islands are subject to floods, typhoons, earthquakes and volcanic eruptions. Some volcanoes of interest are Taal, the lowest volcano in the world and Mt. Mayon, recognized as the most perfectly-formed volcano cone in the world, both of which show many indications of recent eruptive disturbances. The larger islands have high rugged, mountainous interiors, mostly ranges running north to south with peaks emerging above hills and valleys. The main mountain ranges are the Cordillera Central on the western side, and the Sierra Madre on the eastern side, both running north to south, roughly parallel to the coastline of Luzon. The highest mountain in the Philippines is Mt. Apo, 2,954 meters (9,600 feet) high in Mindanao. Slightly smaller is Mt. Pulog at 2,928 meters (8,481 feet) in northern Luzon. In some places, the mountains drop steeply to the sea.

Scattered between the Pacific Ocean on the east and the South China Sea on the west, Balintang Channel on the north and Celebes Sea on the south, the islands of the Philippines form an archipelago almost as large as that of Japan proper. The biggest island and farthest north, Luzon at 40,410 square miles (104,688 square kilometers), occupies 35 per cent of the nation’s total land area, and is surrounded by numerous islands and islets. It is about 105 kilometers (500 miles) from Taiwan and about 1,250 miles from Australia. The Philippine Trench (Mindanao Deep), the world’s deepest spot at 10,057-meter ( 32, 995 ft.) deep is 60 kilometers (37.28 miles) off its southeast shores. Mindanao is the second largest island and is located in the south. Many islands have extensive coral reefs offshore.

The ten largest islands are Luzon, Mindanao, Samar, Negros, Palawan, Panay, Mindoro, Leyte, Cebu, and Bohol. All but 460 out of the 7,100 islands occupy areas of less than one square mile apiece. Only 46 are larger than 62 square miles (100 square kilometers). Many of the 7,100 islands are little more than rocks, reefs, or sandbanks. They are mere specks on the ocean. Some 4,600 are named and about 1,000 are inhabited. The Philippine Islands share a total length of about 11,500 miles (18,000 kilometers) of coastline. There are hundreds of rivers and bays. Manila Bay is the main port.

The Philippine Islands lie wholly within the tropics, between latitudes five degrees and fifteen degrees north of the Equator, so that if they could be brought straight across the Pacific to the American continents, they would extend from the middle of Mexico to the middle of Colombia in South America.

The Philippines has a complex weather pattern. It has moist tropical climate. The Philippines is hot and humid year-round with seasons determined by the prevailing winds. The eastern parts of the Philippines receive their heaviest rainfall from November to June and the western parts of the Philippines have heavy rain from June to November. Rainfall can average seventy inches a year with some areas getting as much as two hundred inches especially during the monsoon season between October and April. Climate varies by region, but one can escape heat by moving to higher elevations like Baguio, the 1,524-meter high elevation summer capital.

There are plenty of mineral deposits like gold, coal and iron in various locations. The volcanic soils of the Philippines promote a rich, varied growth of plants. Much of the archipelago was covered with thick jungle with diverse tropical vegetation, much of which is in the mountainous interiors. Rugged ridges of hills and steep mountain ranges dot the countryside. Tropical rainforests give way to open parklands. The area outside the equatorial belt, particularly north of the equator, is also subject to devastating periodic typhoons. Swift-flowing streams during the rainy season turn into deep arid gullies during the hot dry season.

Rivers flowing from the highlands water the extremely fertile soil of the agricultural lowlands. Rice paddies, vast swamps, coconut, sugar and tobacco plantations abound. Coconut trees, the Philippines’ most important tree, are everywhere. It is used for coconut wine to drink, coconut milk to drink, coconut meat to eat, coconut heart for making lumpia (egg roll) and salad, coconut oil for cooking and coconut wood for building materials. There are hardwood trees of ebony, teak and cypress for building and making furniture. Rattan and bamboo abound. Nipa palms are used for roofing materials. Beautiful mahogany and narra are very special wood for making furniture.

The Island also produces an abundance of delicious tropical fruits. Mangoes, avocado, papaya, guava, lanzones, chico, duhat, siniguelas, langka and the hugely smelly durian are some of the more popular and exotic fruits. Breadfruit and bananas can also be found in the Philippines, the former being used also for making barkcloth. There were two major species of bananas grown, the Musa troglodytarum with a vertical fruit stalk and the more familiar looking Musa sapientum whose fruit stalk bends downward. I miss them all! 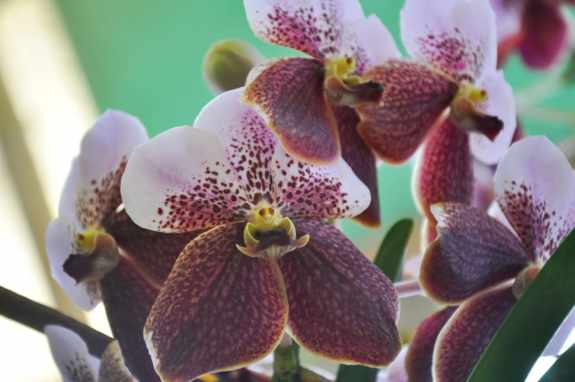 Botanists have discovered more than 12,000 different species of plants. Orchids thrive here. The 1,000 orchid species include the popular waling-waling orchid of western Mindanao. Sampaguita, the white, sweet-smelling national flower, frangipani, bougainvillea and hibiscus also abound. In addition, more than 1,000 species of fern and more than 8,000 plant species flower, decorating the country with an array of color and fragrant scents. At least 130 species of Philippine fauna now stand on the United Nation’s list of endangered and threatened species.

Some fifty years ago, forest, conservatively valued at $20 billion at the time, covered more than 53 percent of the islands. Hungry for foreign currency, commercial logging was a nationally prioritized industry from the 1950s to the 1970s. The Estrada administration banned commercial logging but more than 70 percent of the nation’s original forests have already been destroyed by that time.

Until next time. The Philippine story continues.

The Philippines by John Cockcroft

12 thoughts on “The Philippines – A Tropical Paradise”