The most daring rescue mission in military history! 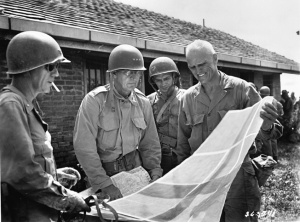 Generals Eichelberger and Swing discussing plans of operation on Luzon

“I doubt that any airborne unit in the world will ever be able to rival the Los Baños prison raid.  It is the textbook airborne operation for all ages and all armies.”

By this time, Everett “Smitty” Smith was an NCO and when I’d asked him many years ago if he was part of the Los Baños Raid, he said, “No, I was occupied somewhere else.” As best as I can find in my research, he was busy with the rest of the 187th near the 457th Parachute Field Artillery Battalion that was commanded by Captain Flanagan. (The captain would later become Lt. General E.M. Flanagan, author of many WWII historical books.) Although Smitty wasn’t at this dramatic feat of the 11th Airborne Division…