About 87 different languages and dialects are spoken in the Philippines. The ten main ones are:

The languages are basically of Austronesian or Malay-Polynesian origin, but many have assimilated words from Indian, Arabic, Chinese, Spanish and English. All these influences can be seen in many words of the Tagalog language. Nowadays, Filipinos use Taglish which is a mix of Tagalog and English. If you notice, most Filipinos switched back and forth from English and Tagalog as they speak.

From Sanskrit (Indian) – Tagalog adopted words such as aksaya (waste), katha (compose, or write), kuta (fort), and others;

There is no C, F, J, Q, V, X in the Philippine alphabet. K is used for C; P or PH is used for F; H is used for J; K is also used for Q; B for V; and KS for X. When I was in high school, our Tagalog teacher taught us the ancient alphabet. I often wonder if it is still being taught in school today. Probably not.

Tagalog was declared the official language by the first revolutionary constitution in the Philippines, The Constitution of Biak-na-Bato in 1897.

In 1946, Tagalog which had been made the national language of the Philippines became one of the three official languages, the other two being English and Spanish. If you go to college, chances are you will learn a few Spanish words because “Noli Me Tangere” and “El Filibusterismo” by Jose Rizal, our national hero, are required courses to take in order to graduate and it is in Spanish. In my college years, those two novels are required reading in Spanish. “Noli Me Tangere” in my junior year and “El Filibusterismo” in my senior year. Not that we are immersed right away in Spanish but we had to take Spanish 1 in our freshman year and Spanish 2 in our sophomore year. Once we entered our Spanish class in my junior year, no English or Tagalog were spoken. It was a total immersion in the Spanish language. We were fined for violating the rule. Twenty-five cents every time we spoke Tagalog or English. By the time we ended the course in our senior year, our professor treated us to a big dinner party at a nice restaurant. Here is a group photo of the class at that end of the year party. 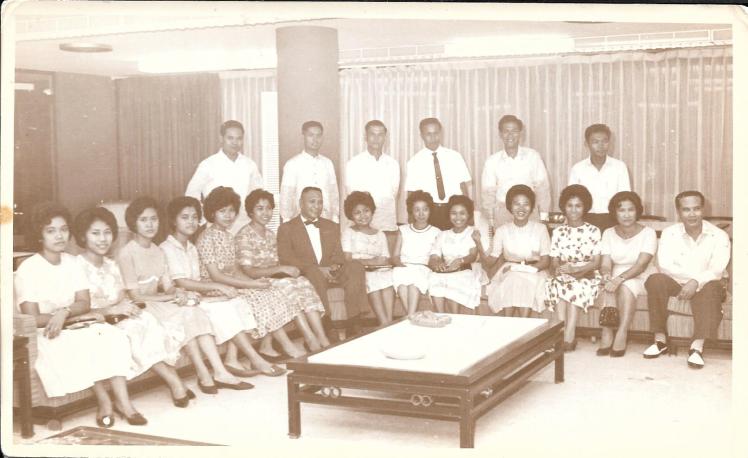 I’m the second person on the left. Our professor (with the bow tie) was a military man and run the class with military precision but we liked and respected him and we learned a lot from his class.

The world Tagalog is derived from the endonym taga-log (“river dweller”), composed of tagá (“native of” or “from”) and ilog (“river”).

The Tagalog language also boasts different accents unique to some parts of Tagalog-speaking regions. Batangas Tagalog boasts the most distinctive accent in Tagalog compared to the more Hispanized northern accents of the language. Because of its uniqueness, the Batangas accent has been featured in film and television. The Batangas dialect is also known for the particle eh. While it is used throughout the province, some variations exist such as ala eh. This particle has no intrinsic meaning. Its closest equivalent in English is in the conversational context of “Well. . .”

Whenever a Filipino asks me where I’m from and I say “Batangas”, I inherently know their next comment is “Ala eh”.

Reference: The Philippines by John Cockcroft

Until next time. Let’s keep exploring the Philippines.

8 thoughts on “Languages of the Philippines”